Lynn Patrick has been performing instrumental acoustic guitar music for more than twenty years. As she releases her sixth album, Strawberry Boat, she may just be one of the top female guitar recording artists in the nation. Her unique music is heard by millions on multiple media platforms and has been satisfying her loyal fans for years. Her tunes have also helped to create the mood and soundtrack for numerous reality TV shows; documentaries, such as Mariel Hemmingway's"Running From Crazy"; NPR; the Weather Channel; the CBS daytime drama, “The Young and The Restless,” along with weekly airplay on the Music Choice “Soundscapes” and Sirius XM “Spa” radio channels; Pandora; and Spotify.

Patrick grew up in Florida. After graduating from Florida State with a Humanities degree, she moved to Boston to play music. After living there for two years, she made her way out to Colorado where a lot of her music was inspired by living in the Rockies. She loves being with nature and the outdoors and that comes through clearly in her songs.

Throughout her career, Lynn has received numerous accolades for her music including winning Best New Age song in the Independent Music Awards from her two albums, Winnie's Guitar and On the Wind.

After writing guitar music for “The Young and the Restless” show, over a period of one year, Emmy Award winning music supervisor, Paul F. Antonelli expressed: “Lynn’s music is so beautifully poignant and filled with emotional nuance which is essential to the musical palette of Y&R, her guitar work is stellar. She’s a master!”

Despite the diversity of styles, a common thread runs through all of Lynn’s songs: every one of them has an uncanny knack for uplifting the environment.

With the release of her new album Strawberry Boat, on Dakota Ridge Records, the tracks are a fusion of instrumental guitar music embracing folk, new age-pop and acoustic soft jazz. Songs range from solo finger-picking to arrangements with cello, violin, piano and percussion. “The creative process, during the making of this album, felt like a sanctuary,” said Patrick. “There’s something sacred about creativity and I definitely connect with a power greater than myself when making something new. It’s alchemy, I guess, and the experience is more wonderful than I can describe. It’s both humbling and empowering.”

Boulder's Daily Camera wrote: “With her mix of intricate, happy-sounding acoustic guitars, Lynn Patrick composes the unofficial soundtrack to life in Boulder...instrumental songs that range in mood from upbeat and energetic to reflective and meditative.”  Denver's Westword Magazine said: ”Patrick plays acoustic music of the brightest sort" and the Boulder Weekly described Lynn's On the Wind CD as" an amazing collection of instrumentals for any guitar lover, from quick-pick fretwork to soothing serenades. This is local music at its finest.” 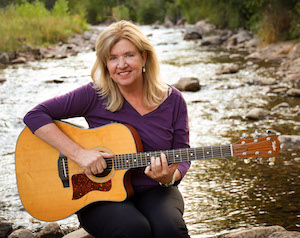